Oct 25 / Zac Stout
Want more great
Catching Content?
Sign up for FREE and see everything we have to offer!
There has been a lot of buzz in the catching world recently about the Minnesota Twins organization and the one-knee system that Tanner Swanson (Twins Minor League Catching Coordinator) has been implementing. Not sure what I'm talking about? Take a look at the video below of Mitch Garver.
Write your awesome label here.
Notice anything strange? Mitch is catching from a one-knee stance with runners on base. In fact, he caught the entire 2019 season from ONLY one-knee stances. Conventional wisdom says catchers need to transition to a secondary stance with runners on base to prevent free bases on wild pitches and pass balls.
I wanted to take a deeper look at the numbers to determine whether staying in a one-knee stance with runners on base is beneficial at the high school level.
This Fall I began collecting a lot of data on both our HS age pitchers and catchers. I looked at both in-game performance and data collected in drill settings to better guide what stances our HS catchers choose to utilize. 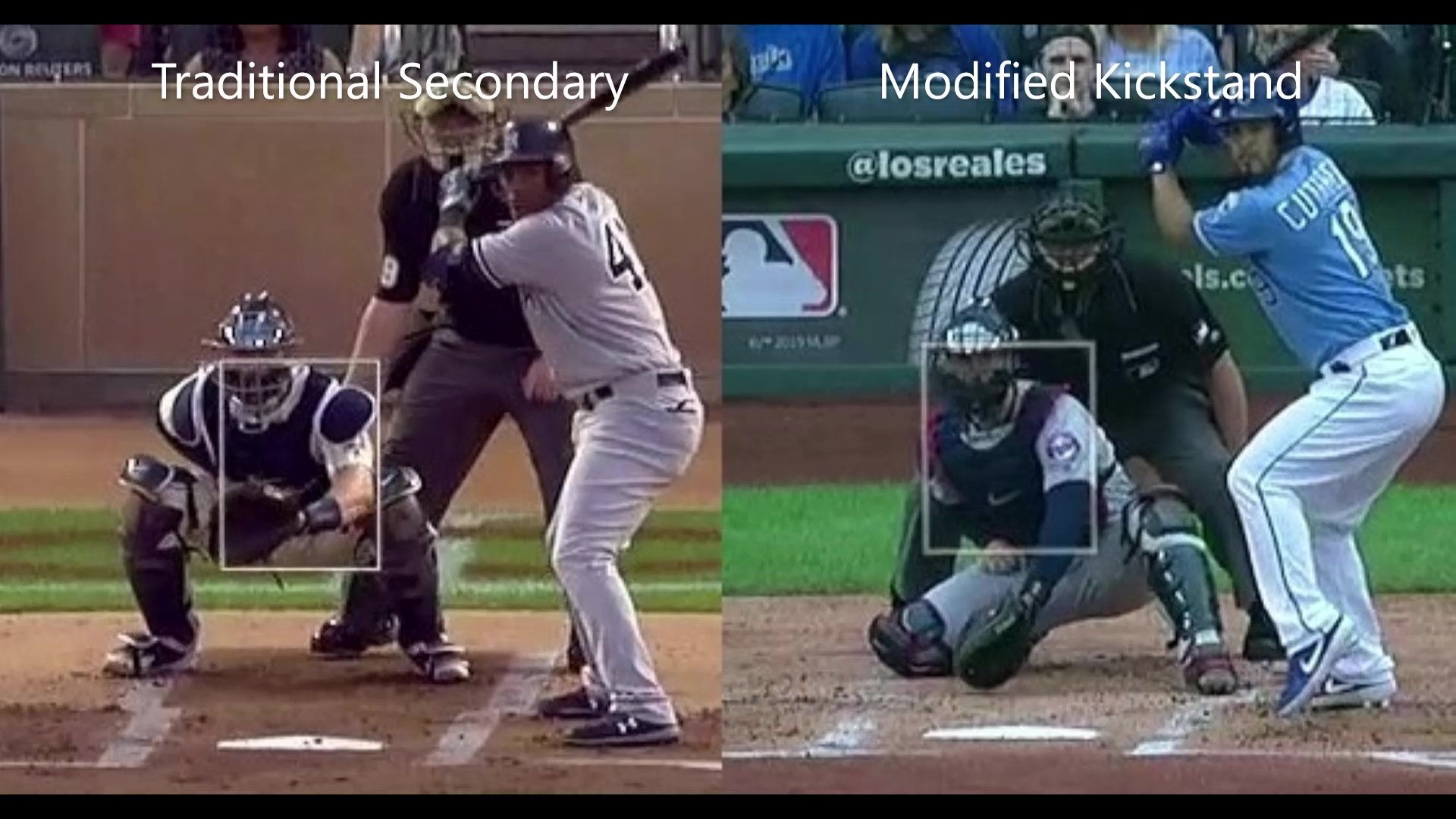 While the data collected is limited to a small sample size and by no means conclusive for all situations and pitchers, it does give us some starting guidelines of when to use one-knee vs traditional stances as we continue to evaluate and gather more data on the impact of each stance at the high school level.
Stance Guidelines with Runners on Base for High School:
The intent of these guidelines is to give our high school catchers simple instructions on when to use each stance to maximize their run prevention throughout the season. These guidelines are simplified to provide a starting point to begin implementing one-knee setups into the catcher’s repertoire. A more detailed breakdown of how to evaluate each pitcher and their pitch types is at the end of this post.

How Does the One-Knee Stance Help Run Prevention

There are 3 main skills that a catcher utilizes to impact a game. Receiving (pitch framing), blocking, and throwing. Each one of these skills, whether executed successfully or not, has an impact on the outcome of a game. One-knee stances help improve a catcher’s receiving on bottom-zone pitches and can increase how many of those pitches end up being called strikes.
For MLB the potential run value of each skill swings heavily in favor of receiving. Pitch framing has a potential of 7.05 runs per game. Meaning, that an opposing team would score an average of 7 more runs a game if every borderline pitch was called a ball vs if they were all called strikes. Compare that to the 1.58 runs given up if every ball in the dirt is missed and you can start to see why maximizing a catcher’s receiving ability makes sense.

Another way to look at it is this: Losing 2 borderline strike calls has the same impact on the game as allowing a WP/PB with a runner on 1st.
That really puts into perspective how a traditional secondary stance may actually be losing more runs via poor receiving on low pitches than it saves from blocking.
The philosophy behind the one-knee system is simple. In order to maximize run prevention out of the catching position, we should learn to block and throw from our best receiving stance. This differs from the traditional approach of learning to receive from our best blocking/throwing stance.

Catcher Skills at the HS Level

Now that we understand the intent of the one-knee system and why it works in MLB, how does that translate to high school? Does the difference in HS pitching affect the potential run values of each catcher skill?

The data we collected in the 2019 Fall season suggests that high school pitchers throw fewer borderline pitches and more pitches in the dirt than their MLB counterparts. Pitch framing still has a greater potential impact than blocking, but the gap between the two is much smaller than at the major league level.
Does this mean the one-knee system is not appropriate for high school? Not quite. We need to look closer at how the one-knee stance affects blocking performance. The Twins organization has seen an improvement in blocking from one-knee vs traditional secondary stances. If the same holds true for high school, we may be able to increase framing runs without taking a hit on blocking performance.

Blocking from a One-Knee Stance

Weaker blocking seems to be the main argument I hear against staying on one-knee with runners on base, and it’s certainly true that lateral range is limited while in a one-knee stance. What we have found is that most catchers block significantly better on dirt balls within the catcher’s box from a one-knee modified kickstand stance.
Write your awesome label here.
In a practice setting on turf with a machine feeding the baseball, our catchers were able to block, recover the baseball, and throw it in less than 1.89sec 64% of the time out of a traditional secondary stance. From a right-knee-down modified kickstand their success rate increased to 84%. This shows that high school catcher’s are not only able to block pitches within the catcher’s box from a right-knee-down modified kickstand stance, but they are more consistent and recover the baseball faster than from a traditional stance.

While blocking pitches within the catcher’s box seems to be a strength of the right-knee down stance, blocking wide misses (pitches outside the catcher’s box) is not. The right-knee down stance restricts the lateral mobility of the catcher. So much so, that wide misses by the pitcher must be picked instead of blocked. This is the part of the one-knee system that makes most coaches cringe or call the stance lazy. Something in us wants to believe that a high-effort movement like wide lateral blocks from a traditional stance is more effective than a low-effort movement like a pick. But as pitch velocity increases (>80mph) most catcher’s fail to block wide misses consistently from a traditional stance and picking the baseball becomes just as effective.
However, high school pitchers do not throw all of their pitches over 80mph, so how does the one-knee stance affect blocking of “slower” pitches when we include wide misses outside of the catcher’s box?

This past fall, we tracked 3 catchers’ game blocking stats for dirt pitches within the catcher’s box and wide misses outside the catcher’s box on pitches less than 80mph. There are a few points of interest highlighted by this data.
If we extrapolate the improved blocking performance of the right-knee-down stance and assume we are only 15% successful on picking wide pitches (2 successful picks every 5 games), than we get the results below:

This shows that on average the improved blocking of pitches within the catcher’s box offsets the reduced blocking performance on wide misses. We would not expect to give up more runs due to blocking from a right-knee-down stance vs a traditional secondary.
*It is worth noting that this is a limited sample size. The skill level of pitchers varies greatly with high school athletes. The RKD stance will benefit pitchers that miss wide less frequently, and may be a detriment to pitchers that miss wide more frequently. For this reason, on pitch types less than 80mph we should evaluate how often the pitcher misses wide in the dirt to determine the appropriate stance.

With the catcher’s this Fall, we have seen no meaningful difference in throws between the two stances. Transfer times, velocity, and pop-times all remained similar out of either stance.

In order to develop basic guidelines of when to use each stance, I focused on 2 variables. Pitch velocity and the ratio of borderline strikes to wide misses in the dirt.

First, pitch velocity. For pitches greater than 80mph the traditional secondary stance was no more effective at blocking wide misses than the right-knee-down modified kickstand stance. At these velocities the right-knee stance offers better overall blocking performance and receiving regardless of how wild the pitcher may be. For this reason, I recommend to utilize the right-knee-down stance for all pitch types greater than 80mph regardless of what bases are occupied.

For pitches less than 80mph I suggest using the ratio of borderline pitches to wide misses to determine the most appropriate stance for each pitch type of each pitcher. This ratio was chosen to help ensure our selected stance is most likely to maximize run prevention. By assuming the strike conversion rate on borderline pitches will increase by 25% when using a RKD stance and the success rate on wide blocks will decrease by 55%, we get the following guidelines for pitches less than 80mph:
*It is worth noting that we are comparing the ratio of borderline pitches to WIDE misses in the dirt, not all pitches in the dirt or wide misses in the air.

By following these guidelines we are increasing the chances that we only use the RKD stance when it is most likely to prevent more runs through receiving than given up by missed wide blocks.

The simplified guidelines listed at the beginning of this article represent an “average” high-school pitcher. Many varsity pitchers may be accurate enough with offspeed pitches where the RKD stance may be beneficial with a runner on 3rd.

Because of the limited data set and lack of pitch tracking technology at the high school level several assumptions were used to determine the guidelines detailed above.
Want more great
Catching Content?
Sign up for FREE and see everything we have to offer!

We are an online school based in the United States committed to providing and continuously improving the player development of baseball catchers everywhere.
Drag to resize
Copyright © 2023
Company
Join our team
Resources
Policies
Created with