Apr 18 / Paul Rozzelle
Want more great
Catching Content?
Sign up for FREE and see everything we have to offer!
Share this post with a friend
Paul Rozzelle
Head Coach - Catawba Valley CC
In this day and age, we cannot outrun the use of data and analytics that helps us in our daily lives and this includes baseball. These things are here and are never going away. Every major consumer company is using them to figure out better marketing strategies to get you to buy their products. Major manufacturing companies are using them to figure out more effective processes so they can maximize production. If we can learn to look at data and analytics as simply another means to measure effectiveness, we would be better suited in all avenues of life. Not just coaching catchers, bat path, or pitch mechanics, but we could understand that utilizing correct data can help validate or challenge our methods and express the importance to our players as to why we are teaching it this way. I heard one time that...
You shouldn't make things important just because you can measure them. You should measure them because they are important."
For the purpose of this blog, I want to piggyback off the tremendous case study that Collin Wilber did previously. Our catching core was a part of this case study and if you haven’t read his report. I want to look more into how we used the data while the season was going on to hopefully help expedite how quickly guys grasped onto the idea of maybe trying something they would not have on their own. In this case, it was pertaining to a certain stance technique and it’s benefit based on the data. This data came from THEIR OWN NUMBERS! Not preexisting numbers from MLB or another program, but directly from the four catchers within our program.

We teach our catchers 3 primary stances. Traditional, Left-Knee Down and Right-Knee Down. There are modifications for each stance but for the purpose of this article, we will use the three basic techniques. Our guys were all traditional based when they got to our program and some did utilize left-knee but, admittedly, they didn’t know why they were doing it other than they saw other people and it either looked cool or provided relief during the game to take the stress off the legs. Right knee down was a foreign concept. The only problem was, that if you truly wanted guys to focus on receiving and the value it creates they needed to at least understand why a right-knee down set up could be beneficial in certain situations as well as with runners on as it provides the easiest footwork pattern for throwdowns.

We are all victims of comfort. It is human nature to go, “I don’t know. I’ve never done it that way before. It doesn’t feel right. I think I’m just going to continue to do it the way I have always done it.” This is a normal thought process! “If I have gotten this far with what I am doing, why do I need to change?” Every single person reading this has uttered something along these lines at some point in their life! As coaches with more life experiences (some more than others) we now know that being uncomfortable is where growth happens! It is where the magic happens! But without the proper understanding of the importance of trying it a different way, there will probably be little room for new buy-in and maybe peak performance may either not be reached or will happen on a slower timeline. This is where...drum roll, please...DATA AND ANALYTICS enter the equation! We were able to look at their data and be able to show them information that they could not dismiss.

We now understand that our catchers struggled with implementing a right-knee down stance in games because they either felt uncomfortable with it or did not believe it helped them be the best receiver they could be. However, now looking through the data that we compiled during every bullpen and game via we were able to take that raw data and put it to work! 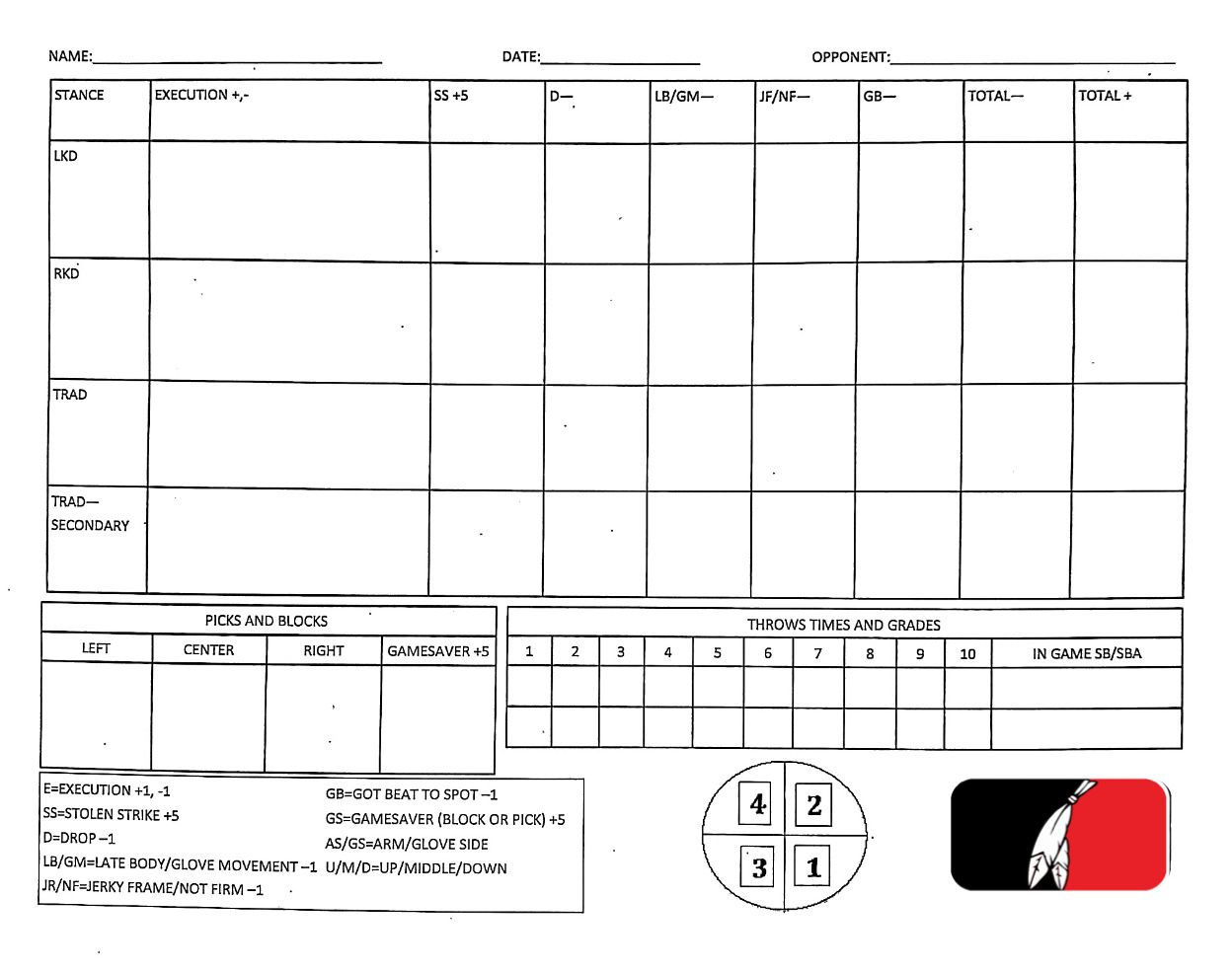 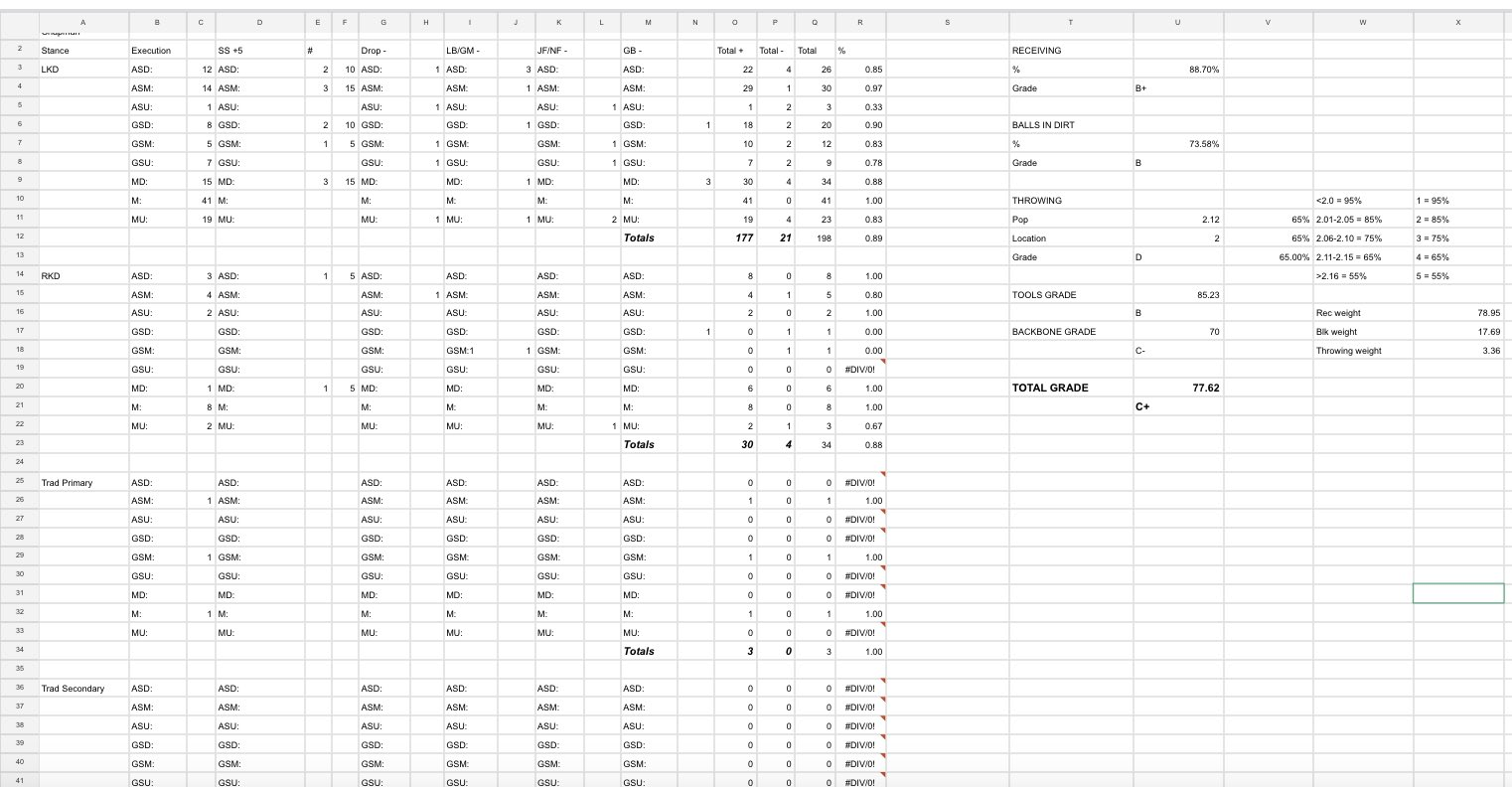 Once we had the raw data, we were able to put it into a “Heat Map” that showed their success rates for balls in all possible areas of the “Catch Zone”. It is important to clarify that the zones aren’t exact representations of the strike zone but more of a representation for where the catcher caught the ball in relation to their body (i.e. glove-side down, middle-up, arm-side middle, etc).

This now gave us a visual representation of their performance in each stance and helped us “open some eyes” that maybe they were better at certain areas with right-knee down than they gave themselves credit for.

We could see that arm-side down and middle-down balls were received (at this point) in the season better in a right-knee down set up. This could be for various reasons like the knee is out of the way so it provides more area for the arm and glove to work correctly. It could be because balls to that side of the body usually mean the angles through proper set up allow for more success with a right knee down vs left knee down.

There could be various factors at play, but the most important thing is that our catchers were able to see something visual that could hopefully help them understand the why and importance of the technique. You can also see the reciprocal relationship in the left knee down stance as well in that we handled balls that were glove-side down at a higher success rate. Putting it together allowed for positive discussion and maybe a more open mindset to stepping outside of their comfort zone.

Remember, our guys are practicing all three stances every day but now with the information from the data there was a little more intent with the training as they started to believe that it could be used in-game. So immediately after being shown this information, they took the training reps in drill work into the bullpens and ultimately into the game setting.
Training
Trusting
Take the applicable data, turn it into information that can be used and assist your methods of coaching to better serve your athletes. The ironic thing is that we have been doing this since the beginning of baseball. We quantified certain metrics and deemed them important.

If you are a coach at any level that charts practice or keeps any form of stats, let me be the first to tell you...YOU UTILIZE ANALYTICS! Just because the numbers and data may look unfamiliar to you, the concept is no different from how you are already evaluating and analyzing performance in the game! The biggest piece of this puzzle however is for you TO FIGURE OUT WHAT IS IMPORTANT TO YOU and then find a way to measure it. You can validate your coaching or even sometimes (and I think more importantly) disprove your teachings. To me, this is more beneficial.

In our very small example, we began teaching something and explaining it along the way. We found that there was some hesitation to fully implement because there was a question of belief. We then presented the players with their own data that showed how they could improve which led to a quicker adaptation period than what we would have had without the information. Our guys did not automatically begin using right-knee down as their primary option. They simply added it to their in-game toolbox. Be focused on your teachings, whatever they are, and then don’t be afraid to use data to find a way to make not only your players better, but yourself as well.
Want more great
Catching Content?
Sign up for FREE and see everything we have to offer!

We are an online school based in the United States committed to providing and continuously improving the player development of baseball catchers everywhere.
Drag to resize
Copyright © 2023
Company
Join our team
Resources
Policies
Created with